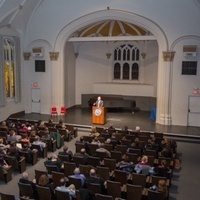 Winifred Moore Auditorium used to be called the Chapel of All Saints and was the location of daily Mass and various ceremonies.

In 1973, the space was renovated and the religious accoutrements relocated around campus, sold, or given away. Many of the pews were sold to alumni for $50.00 apiece. The chapel was renamed Winifred Moore Auditorium after it was renovated with gifts from Winifred W. Rogers and Elizabeth D. Hyatt in memory of their mother and grandmother, Winifred Moore.

Winifred Moore is now used as one of the main locations on the Webster Groves Campus for concerts, film screenings, lectures and other large events