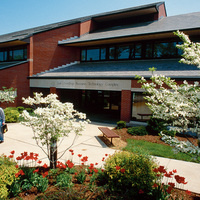 The Sverdrup Complex was a welcome addition to the campus when it opened in 1988. Lack of classroom space had forced the university to hold classes in Nerinx Hall, a nearby Catholic high school. Webster also lost the use of the Plymouth building, a former elementary school owned by the Webster Groves School District, when it was sold to developers in 1984.

The new Sverdrup building became the home for business & management, media communications, and computer studies. At the time it was opened, the facilities were considered state-of-the-art, especially in the media department.

The building is named for General Leif J. Sverdrup, founder of the engineering firm Sverdrup Corporation (now part of Jacobs.) General Sverdrup was instrumental in raising funds to insure the financial stability of Webster in the 1970s.