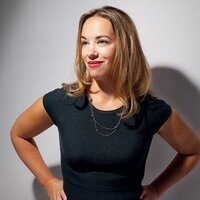 Sarah Kendzior is a St. Louis writer most known for her best-selling essay collection The View From Flyover Country, her reporting on political and economic problems in the US, her prescient coverage of the 2016 election and the Trump administration, and her academic research on authoritarian states in Central Asia. She is also the co-host of Gaslit Nation, a weekly podcast which covers corruption in the Trump administration and the rise of authoritarianism around the world.

Sarah’s writing appears regularly in POLITICO, Quartz, The Chronicle of Higher Education, The Guardian, Foreign Policy, The Diplomat, Marie Claire, The Atlantic, Medium, and Radio Free Europe. She has been a guest on national news shows on NBC, MSNBC, NPR, CBS, CBC News, BBC World Service and other broadcast outlets, and is a recurring guest on the MSNBC show “AM Joy.”

Join us in Browning Auditorium for our next Visiting Writers Series featuring author, journalist, and co-host of the podcast Gaslit Nation Sarah Kendzior.
This event is FREE and open to the public. FREE Parking is located at 572 Garden Ave., St. Louis, MO 63119.

Free and Open to the Public

You're not going yet!