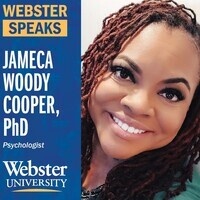 The public discussions around institutionalized racism often focus on the far-reaching economic, educational, and social effects on African Americans. Missing from these discussions are a fourth factor: its effects on mental health.

Jameca Woody Cooper, Ph.D, MA, a practicing counselor in the St. Louis region and a professor of behavioral analysis in Webster University’s School of Education, will discuss the impact that racism has on  mental health at 7 p.m. CDT Aug. 5 in the next episode of Webster Speaks: Dialogues on Race, Equity and Inclusion.

Host Vincent C. Flewellen, Webster’s chief diversity officer, will lead a discussion with Dr. Woody Cooper on various topics about mental illnesses, including studies that show depression is often more debilitating and more persistent among African Americans than whites, according to the American Psychiatric Association. It can arise from racial profiling, avoidance out of ignorance and fear, school curricula that minimize Black contributions to history, and a disproportionate incarceration rate.

This virtual series was created as an expression of Webster’s ongoing commitment to race, equity and social justice. Registration for each episode is free and open to the public. Audience members can ask guests questions via Twitter using #WebsterSpeaks.

Registration is now open for the next installment of #WebsterSpeaks on Wednesday, August 5 at 7 PM CDT. Register with your questions here: bit.ly/39Ef5AH