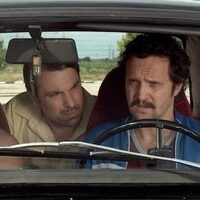 Racking up accolades both critically (a New York Times Critics Pick last week) and commercially (the highest-grossing Romanian comedy ever), Paul Negoescu's Two Lottery Tickets concerns three down-on-their-luck men who play the lottery and win, only to discover that the winning ticket was lost in a petty robbery days before. At that point taking on the qualities of a buddy road movie, Negoescu portrays his characters' bad luck, poor decisions, and boneheaded actions with a sense of real empathy.