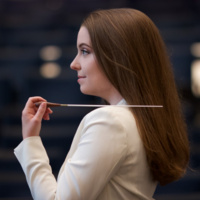 Megan Maddaleno is a current Doctor of Musical Arts Candidate in Orchestral Conducting at The University of Iowa. She has had the privilege of conducting their many orchestral ensembles, new music initiatives, opera and musical theatre productions, as well as studying under such respected conductors as Dr. Mélisse Brunet, Dr. William LaRue Jones, David E. Becker, and opera conductor, Wayne Wyman.

A passionate educator, Megan is currently the Director of Orchestral Activities at University of Wisconsin - Platteville. Prior to pursuing her graduate degrees, she was the Musical Assistant for the Missouri Symphony Society Conservatory and collaborated with the Missouri Composer’s Project and Columbia Civic Orchestra to conduct premieres of local composers. In recent years, she has acted as Cover Conductor for the Missouri Symphony under Kirk Trevor.

In addition to her symphonic work, Megan equally enjoys conducting staged productions. In March of 2022, she collaborated with the University of Iowa Department of Theatre and Dance, conducting a performance of String, a musical by Adam Gwon, and in November of 2021, she made her operatic conducting debut with the University of Iowa Opera Departments’ production of Three Decembers by contemporary American composer, Jake Heggie.

Upcoming engagements for Megan include cover conducting under Mélisse Brunet with the Lexington Philharmonic and the Northeastern Pennsylvania Philharmonic, of which she has covered concerts for the past two seasons. She has also been appointed a Fellowship Residency with the Allentown Symphony Orchestra for their 2022-2023 season, directed by the highly esteemed Diane Wittry. In addition to these opportunities, she will also conduct a fully staged production of Giuseppe Verdi’s La Traviata at Coralville Center for the Performing Arts, which will occur April of 2023.

Megan Maddaleno received her Bachelor of Music Education degree from Webster University, and her Masters of Orchestral Conducting from The University of Iowa.