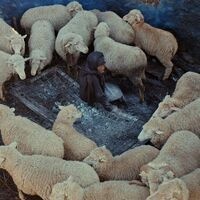 This is Not a Burial, It's a Resurrection

Being the first-ever submission from Lesotho to the Academy for the Best International Film Oscar, Lemohang Jeremiah Mosese's This is Not a Burial, It's a Resurrection is an enchanting story of immense loss and the impending capitalistic destruction of sacred land and spirit. Featuring a mixed cast of professional actors and non-actors, the film stars veteran South African actress Mary Twala in one of her final roles. A grieving mother, ready and longing for her own confrontation with death, is met with the ultimate theft of her connection to the dead, to the spiritual realm, and to the land her community has lived on for so long. Shot in beautifully vivid color in the mountains of Lesotho, This is Not a Burial captures a mystifying and indescribable magic that lies in the depths of a despondent, yet resilient woman with nothing left to lose.