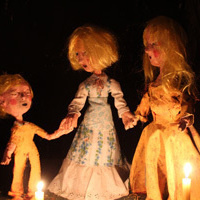 From May 15th to May 28 Film Series patrons can rent The Wolf House. A stunning and innovative work of stop-motion animation, Cristóbal León and Joaquín Cociña’s The Wolf House follows a young woman named Maria who, after fleeing from German religious fanatics, seeks shelter in a home occupied only by two pigs. The house is capable of reacting to Maria’s feelings, the pigs slowly turn into humans, and, well, things don’t always go as planned for poor Maria.

In Spanish and German with English subtitles.