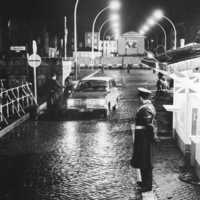 The Spy Who Came in from the Cold

Based on the bestselling book by the master of the spy thriller, John le Carré (Tinker, Tailor, Soldier, Spy), The Spy Who Came in from the Cold finds Alec Leamas (Richard Burton, in one of his finest performances) as a Cold War spy who has to go on one last mission to East Germany. His relationship with librarian Nan (Claire Bloom) leaves him vulnerable in a way unsuited to a spy, making his final mission all the more dangerous. The source material was named one of the all-time 100 novels by Time Magazine in 2005.

With an introduction and post-film discussion, speaker TBA.

Sponsored by the German Section of International Languages and Cultures at Webster University.