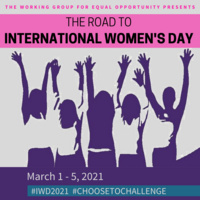 The Road to International Women’s Day 2021: Asylum and Refuge from a Gender Perspective

A challenged world is an alert world and from challenge comes change.

March 8th is International Women’s Day and this year’s hashtag Choose to Challenge is asking how we will help to forge a gender equal world. WVPU’s Working Group for Equal Opportunity, in collaboration with all academic departments, is organizing a number of events that will consider and discuss this question in various contexts throughout the first week of March.

From the International Relations Department: Asylum and Refuge from a Gender Perspective

Dr. Monika Mokre will give a lecture that aims at analyzing asylum and refuge from a perspective focusing on gender and sexuality, drawing on theoretical thought as well as empirical examples. Gendered stereotypes play an important role in contemporary discourses on refuge and migration. While women and children are mostly seen as victims men are seen as perpetrators. At the same time, female refugees are generally neglected in asylum discourses as well as politics. Similarly, an ambiguous role is ascribed to sexual minorities.

Each day of the Road to International Women’s Day will feature an event presented by one of WVPU's academic departments, culminating in a Panel Discussion titled Women and the Pandemic on Friday, March 5th 2021.