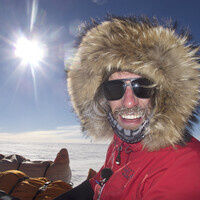 Just five months after marrying the love of his life, Grant Korgan burst-fractured his L1 vertebrae while filming a snowmobiling segment in the Sierra Nevada backcountry. In an instant, this Lake Tahoe native, nanoscientist, and extreme athlete had added spinal-cord-injury recovery to his list of pursuits. When Grant discovers other “adaptive athletes” who continued to pursue their passions despite disabilities, he connects with professional adventurers who offer a radical test of his abilities: cross-country skiing to the South Pole on a “sit ski,” on which he would propel himself entirely through upper-body strength. Grant tackles this challenge, spending more than a year in training while simultaneously undergoing rehab to try to restore some strength and mobility to his legs. Finally, on Jan. 17, 2012, along with two seasoned explorers, Grant attempts to becomes the first spinal-cord-injured athlete to literally push himself nearly 100 miles (the final degree of latitude) to the most inhospitable place on the planet — the bottom of the globe, the geographic South Pole. Co-director/subject Korgan accompanies the screening. The feature shows with the short Child of the Earth (Claudio Faeh, Switzerland/U.S., 2018, 12 min.): A warm and intimate portrait of one young patient’s journey beyond the confines of his broken body, to outer space and beyond, through virtual reality.