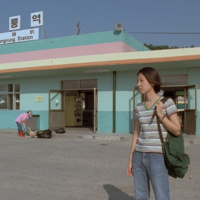 The Power of Kangwon Province

As South Korean director Hong Sangsoo grows in popularity in the United States (his newest film, The Woman Who Ran, opens with us in July) film distributors are prioritizing the release of movies from his extensive back catalog. 1998's The Power of Kangwon Province is only his second feature and is getting the full treatment here with a new restoration and a new subtitle translation. Split into two parts (a structure recognizable to fans of his later film Right Now, Wrong Then), we first follow a young woman named Jisook as she vacations with friends, and then in the second part we follow her ex, Sangwon, who happens to be vacationing in the same place at the same time.