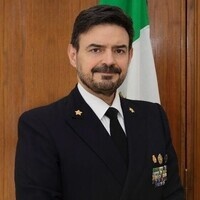 The Mediterranean Sea and International Security: Operation IRINI and Beyond

Covid Certificates and masks are mandatory to attend the event on campus.

Rear Admiral Fabio Agostini, Chief of Staff of the Italian Joint Operations Headquarters and former Commander of Operation IRINI, will give a talk on The Mediterranean Sea and International Security: Operation IRINI and Beyond.

The EU Naval Force Mediterranean (EUNAVFOR MED) Operation IRINI was launched as a consequence of the decisions taken at the Berlin Conference on January 19, 2020, following which the EU Foreign Affairs Council decided to launch an EU Common Security & Defense Policy (CSDP) Operation to contribute to the implementation of the arms embargo off the Libyan coast, enshrined in relevant UNSCRs, in order to contribute to a peaceful solution to the armed conflict.

Operation IRINI is the only operation to implement the UN arms embargo on Libya in an effective, balanced and impartial manner.

The political vision by the HR/VP, Joseph Borrel, reflects the holistic approach agreed at the Berlin Conference. IRINI is not the only mean to contribute to the end of the long-lasting Libyan conflict that began in 2011. IRINI is part of a process involving political, military, economic, and humanitarian tracks.

IRINI investigated some 4000 vessels that transited in the Central Mediterranean Sea, monitored 16 ports and oil terminals, carried out more than 180 visits on board merchant vessels with the permission of the Master, and carried out 20 full inspections of suspect vessels with the consent of the flag state.

IRINI did a lot during the last one and a half years, but there are quite a few lessons identified and learned that could increase the operation’s output and thereby the EU's contribution to the peace process in Libya and for other CSDP Operations. The aim of this talk is is to go through the operation characteristics and achievements and discuss some relevant lessons taken.

You can learn more about our speaker HERE

The event is free of charge and open to the public, but it is preferable to register HERE

You can join the event on Zoom HERE