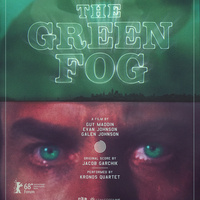 Despite living in an era of remakes, it’s a safe bet that you’ve never seen one like The Green Fog. Fans of director Guy Maddin, known for his experimental pastiches in classic modes of cinema (perhaps best exemplified in his 2000 short “The Heart of the World”), will have an idea of what to expect. Here Maddin (a previous guest of the Webster Film Series) and collaborators Evan Johnson and Galen Johnson remake Alfred Hitchcock’s San Francisco classic Vertigo using only pre-existing footage culled from Bay Area-shot studio films, experimental films, and television. As unusual and interesting as it sounds, it’s remarkably easy to follow if you’ve ever seen Vertigo (perhaps less so if you haven’t).