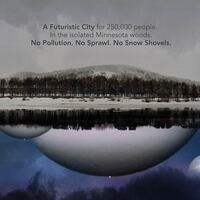 In the 1960s, visionary scientist Athelstan Spilhaus, alarmed by the growing environmental crisis in America, worked with a team of committed urban experts to plan a domed city whose futuristic technology and innovative design would eradicate the pollution and waste of the modern city and lead the way to the 21st century. Spilhaus had worn many hats: respected meteorologist, oceanographer, and inventor; commissioner of the Seattle World's Fair; and author of a popular futurist newspaper comic. But in the mid-1960s, he became a frustrated member of a federal committee on urban pollution. To truly understand the problem, Spilhaus concocted the Minnesota Experimental City (MXC), which would be constructed in the Minnesota woods. But before the city of the future could break ground on a virgin site in isolated northern Minnesota, rural citizens and mistrustful environmentalists rose up in protest, doubtful of its pollution-free promises.