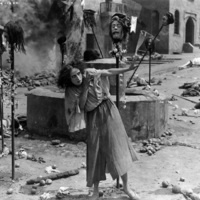 The Dumb Girl of Portici

During the seventeenth century, the Duke d'Arcos levies another onerous tax on the workers, who begin talk of a rebellion. Disguised as one of them, Alphonso (Douglas Gerrard), the duke's son, goes among the common people to gauge their feelings and falls in love with Fenella (world-renown ballet dancer and choreographer Anna Pavlova), the dumb girl of Portici, a small Italian village. He visits her frequently, but then breaks her heart when he marries Elvira (Edna Maison), a woman from his own class. Meanwhile, the duke keeps levying taxes, and the people select Fenella's brother Masaniello (Rupert Julian) as their leader and successfully storm the duke's palace. The duke's forces, led by Alphonso, stage a counter attack leading to tragedy.