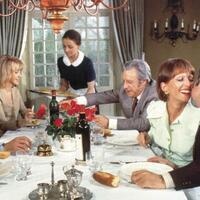 The Discreet Charm of the Bourgeoisie

In Luis Buñuel’s deliciously satiric masterpiece, an upper-middle-class sextet sits down to a dinner that is continually delayed, their attempts to eat thwarted by vaudevillian events both actual and imagined, including terrorist attacks, military maneuvers, and ghostly apparitions. Stringing together a discontinuous, digressive series of absurdist set pieces, Buñuel and his screenwriting partner Jean-Claude Carrière send a cast of European-film greats — including Fernando Rey, Stéphane Audran, Delphine Seyrig, Jean-Pierre Cassel, and Bulle Ogier — through a maze of desire deferred, frustrated, and interrupted. The Oscar-winning pinnacle of Buñuel’s late-career ascent as a feted maestro of the international art house, “The Discreet Charm of the Bourgeoisie” is also one of his most gleefully radical assaults on the values of the ruling class.