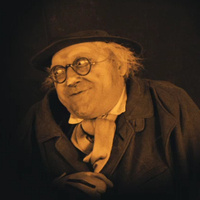 The Cabinet of Dr. Caligari

A key text of German Expressionism, The Cabinet of Dr. Caligari has long been a favorite of the Webster Film Series community, up to and including a successful screening in January of this year. Meanwhile, it has been one of the most-requested movies for the nationally-touring, Austin-based Invincible Czars, also favorites of the Webster Film Series, to play live music alongside. We’re finally all getting our wish—Caligari with live music by the Czars—one night only, for an unmissable event.

In recognition that this is considered to be the first horror film in film history, and that Halloween is around the corner, costumes are encouraged! Learn more here.