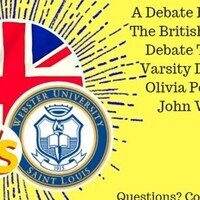 The British are Coming! - a Debate between Webster ad the British National Debate Team

Topic: "This House would prefer a world with open borders."

The debate will be held in Browning Hall, Interdisciplinary Science Building auditorium (Room 160)
11:45 am.- 1 p.m. (Feel free to come late/leave early if needed!)

Hosted by the Webster University Forensics Team and Speech and Debate Club.