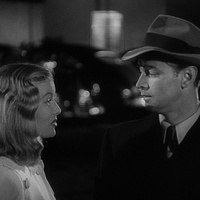 In the first original screenplay by master of the crime thriller Raymond Chandler—for which he received an Oscar nomination—The Blue Dahlia pairs Alan Ladd and Veronica Lake for the third time. Ladd plays Lt. Commander Johnny Morrison, who returns home from World War II only to find that his wife, Helen (Doris Dowling, Bitter Rice) has been cheating on him. Helen soon after turns up dead, and Morrison enlists the help of a mysterious stranger (Lake) to clear his name and find the real killer.