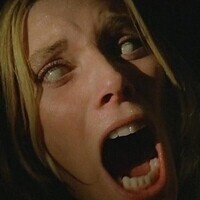 Second in the Gates of Hell trilogy and, alongside Zombie, one of the films most responsible for Fulci’s reputation, The Beyond is lifted by unusually strong production and sound design, used in the service of surrealist flourishes, more fun eye trauma and surprisingly vocal tarantulas. Here our gateway to hell comes in the form of the Seven Doors Hotel just outside of New Orleans, newly inherited by an unsuspecting young woman named Liza (Catriona MacColl of City of the Living Dead). Hoping to turn the hotel into a success, Liza inadvertently allows for the gates to open, thus resulting in strange occurrences in and around her property.