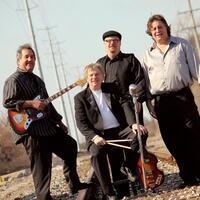 2014 is a big year for The Beatles. It is the 50th anniversary of their arrival in the U.S. and Thursday, January 30, marks the 45th anniversary of the final live performance by the group - their famous rooftop concert on the roof of their Saville Row recording studio.

The School of Communications and the Department of Audio Aesthetics and Technology is helping to commemorate the event with the Abbey Road Warriors (a local Beatles tribute group). The Abbey Road Warriors will perform a concert on the library's 4th floor outdoor patio -- our version of the rooftop. They will perform the same musical set The Beatles played that day. Gather in the quad below to enjoy the performance.

Students from the School of Communications Department of Audio Aesthetics and Technology will be will be on hand doing a live sound recording and a crew of Webster video production students  from the Electronic and Photographic Media Department will be taping the event.