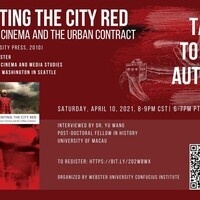 Talk to the Author: 'Painting the City Red: Chinese Cinema and the Urban Contract'

How did Chinese films document and dramatize the profound urban changes over the past half a century or so? How do films preserve urban memories while projecting future cities? How do Chinese filmmakers visualize the diverse urban experience as they negotiate with powerful forces such as socialist urban planning and capitalist globalization? Prof. Yomi Braester, author of Painting the City Red: Chinese Cinema and the Urban Contract (2010), winner of the Levenson Prize (2012) and Guggenheim Award (2013), will share with us his insights on these topics through his study of Chinese cinema in relation with policy makers, film directors and city dwellers.

Prof. Braester is a leading American Sinologist and media scholar. He published several books, numerous articles, and translations in the fields of China Studies, Asian cinema and critical theory. He is the Byron W. and Alice L. Lockwood Professor in the Humanities and Professor of Cinema and Media Studies at the University of Washington in Seattle.

The interview will be moderated by Dr. Yu Wang, Post-doctoral Fellow in history at the University of Macau.

Register for this event!

This “Talk to the Author” program is organized by the Webster University Confucius Institute.

You're not going yet!