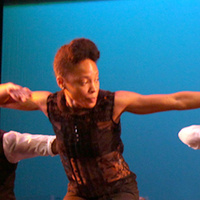 The intense, high energy performing arts group Step Afrika will perform at Webster University on Saturday, January 31 at 7:30 p.m. at the Grant Gymnasium.

Step Afrika! blends percussive dance styles practiced by historically African American fraternities and sororities, African traditional dance and influences from a variety of other dance and art forms. Performances are much more than dance shows; they integrate songs, storytelling, humor, and audience participation. The blend of technique, agility, and pure energy makes each performance unique and leaves the audience with their hearts pounding.

STEP AFRIKA! is the first professional company in the world dedicated to the tradition of stepping. Founded in December 1994, the company is celebrated worldwide for its efforts to promote an appreciation for stepping and the dance tradition’s use as an educational tool for young people. Step Afrika! reaches tens of thousands of Americans each year and has performed on many stages in North & South America, Europe, Asia, Africa and the Caribbean.

Based in Washington, DC, Step Afrika! is DC’s first and only Cultural Ambassador representing the city and nation at events around the world. The company completes an annual 50-city tour of colleges and theaters from Maine to Mississippi and is a national model for the use of stepping in education, espousing themes such as teamwork, academic achievement and cross-cultural understanding.

Step Afrika! is a frequent partner of the John F. Kennedy Center for the Performing Arts and the Washington Performing Arts Society and has graced some of America’s most prestigious stages from the White House to the Lincoln Center in New York City.  Webster University is excited to welcome them to campus to kick-off black history month.

Buy Tickets
This event content is powered by the Localist Community Event Platform.