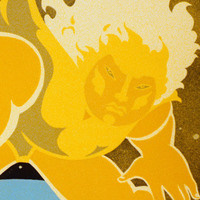 Son of the White Mare

From 8/21 to 9/10, Film Series patrons can rent Son of the White Mare. And current Webster students can see it for FREE. Email us at jessicapierce94@webster.edu for details. A much-anticipated booking originally scheduled for May 2020, we are pleased to host the psychedelic animated classic Son of the White Mare in its new 4K restoration in our virtual theatre.  Originally released in its native Hungary in 1981 but never getting an official U.S. release before now, Son of the White Mare is a real find and a great addition to the world animation canon. With a story based on Hungarian folklore, wherein the titular son, Treeshaker, leads a fight against dragons at the gate of the Underworld, Son of the White Mare engages in visual storytelling in a way that have rarely been dreamt of before or since.