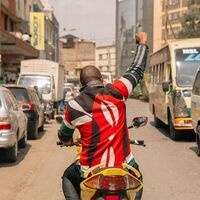 Softie, Sam Soko's debut feature and the first Kenyan film to premiere at Sundance, centers on activist, photojournalist, and, most recently, politician, Boniface Mwangi, otherwise known as "Softie." Pulling back the curtain on life as an activist in the middle of a movement, Softie focuses on Mwangi's constant teetering between his personal life and the larger Kenyan community, revealing the difficult balance between being present for his wife and children and showing up for his country. Initially meant only to be a short, informative video on the how-to's of activism, the story was naturally expanded once Mwangi's personal life revealed itself. Softie, shot in regional Kenya over the course of Mwangi's 2017 political campaign, serves as not only a call to action for social change, but also a story of love and commitment, no matter the challenge.