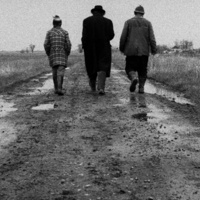 After world premiering its new restoration at Berlinale 2019 and selling out its New York Film Festival screening in less than 24 hours, Béla Tarr’s much-esteemed, rarely-seen (especially theatrically) Sátántangó comes to the Webster Film Series for an anticipated one-time-only event. Ranked the #36 best film ever made in the 2012 Sight & Sound poll, Sátántangó is the keytext of the modern slow cinema movement. Based on the novel of the same name by László Krasznahorkai about an agricultural collective who receive a financial windfall and seek to leave their village, seeing Sátántangó is an experience you won’t forget.

In Hungarian with English subtitles.