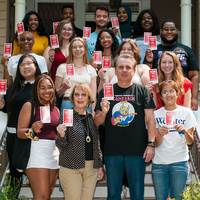 On October 11, the International Day of the Girl, Webster University global teams will launch our network-wide "Red Card" campaign. Red Card is a global campaign to raise awareness about domestic violence and gather personal pledges from people around the world to help raise awareness of discrimination and violence against women and girls. It was launched in partnership with ARDN, an international non-profit non-governmental organization headquartered in New York.

On the main campus in Webster Groves, join Chancellor Beth Stroble and Katie Griffith for a kickoff event at 3 p.m. CDT between Sverdrup and Emerson Library. Take the pledge, and raise a red card to all forms of discrimination and violence against women and girls.

For more background on the Red Card initiative and Webster's involvement, see this story.