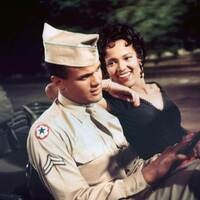 For June we are looking at the films of Otto Preminger, who enjoyed a career in Hollywood spanning five decades. Across nearly 40 feature films, Preminger displayed virtuosity in many genres (film noir, historical epics, courtroom dramas, musicals) and came to be known for pushing boundaries of what was deemed acceptable at a time when Hollywood needed it the most. Whether casting Frank Sinatra as a drug addict (The Man with the Golden Arm, 1955), giving a screen credit to blacklisted writer Dalton Trumbo (Exodus, 1960), or acting under Billy Wilder for Stalag 17 (1953) or as Mr. Freeze in the 60s TV show Batman with Adam West, Preminger could be relied upon to be up to something interesting.

Dorothy Dandridge plays the title character in this film adaptation of the modernized Broadway musical of the Bizet opera Carmen, which 1943 production had book and lyrics by Oscar Hammerstein. The film continues Broadway’s all-Black cast, and Ms. Dandridge found herself with an Oscar nomination for Best Actress for her efforts here, marking the first time a Black actor had appeared in a category as lead and only the third time a Black actor had received such a mention in any category. Co-starring civil rights icon Harry Belafonte, who had appeared as the principal to Dandridge’s elementary school teacher in Bright Road one year prior.

Carmen Jones is available to rent digitally on most platforms for $3-4.

With a free post-film discussion on June 10 at 7:00 p.m. from Renee Thomas-Woods, Associate Professor of Communication and Mass Communication at St. Louis Community College, where she enjoys teaching Film Appreciation and Black Cinema.

Register for this Zoom event here.