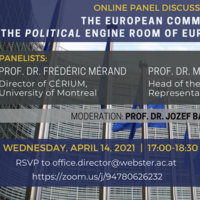 Join our Online Panel Discussion organized by the International Relations Department at #WVPU, with leading experts and insiders who will share their analyses of the emerging political role of the European Commission:

Prof. Frédéric Mérand (PhD Berkeley), director of CÉRIUM at the University of Montreal whose new book The Political Commissioner: A European Ethnography – based on four years of research embedded in the Cabinet of the Commissioner Pierre Moscovici - will be published by Oxford University Press in June 2021.

Prof. Dr. Martin Selmayr, Head of the European Commission’s representation in Vienna and former Chef de Cabinet of European Commission president Jean Claude Juncker whose chapter entitled “Origins and Functioning of the Political Commission: An Assessment from Inside the Juncker Commission’s Machine Room” was published in a volume by Nomos recently.

Please RSVP by sending an e-mail to office.director@webster.ac.at

In the course of the last crisis-driven decade, the European Commission led by Jean Claude Juncker has been increasingly taking on an explicitly political role in EU governance. But what does the notion of a ‘political Commission’ really mean? For some, it relates to the presence of a high number of former politicians in the Commission’s top ranks – four former prime ministers, four former deputy prime ministers, and nineteen former ministers. For others, it was about Juncker’s ten-priority program including employment, growth and investment, digital union, energy union, a “more balanced trade policy” and a “new migration policy”. Still, others think of the introduction of more streamlined vertical project teams led by Commission vice-presidents. Finally, for some, the political role of the Commission relates to its ambition to shape its own political agenda and do so even if this means standing up to member states’ governments.

Please RSVP by sending an e-mail to office.director@webster.ac.at