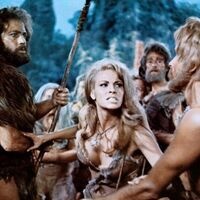 Tumak (John Richardson) is expelled from the Rock Tribe and the protection of their cave after a conflict with his father. He discovers the Shell Tribe, a more advanced coastal people, after several days of wandering. Loana (Raquel Welch in a revealing, prehistoric bikini), the daughter of the chief, nurses Tumak back to health, causing unrest in the Shell Tribe. Tumak is expelled and Loana follows him back to the caves of his people. The two must survive the crude clans and ravenous creatures of this fictional time.