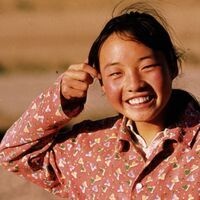 Not One Less post-film discussion

A Webster Film Series hit when we gave it its local premiere in July 2000, Zhang Yimou’s Not One Less engages with an underfunded school in the poor rural village of Shuiquan. 13-year-old Wei is brought in to substitute teach a class for a month while the regular teacher is out. On Wei’s watch, young troublemaker Zhang Huike disappears on his own to the city to get a job to support his poor family. Charged with not losing any children when she accepted the job—a surprisingly difficult task to achieve—Teacher Wei finds herself following her young student to the city, hoping to retrieve him. Not One Less has many charms, but chief among them is the excellent work Zhang Yimou gets from his young actors, all nonprofessionals.

Not One Less is available to watch for free to current Webster University students, faculty, and staff through the Webster University library here. Otherwise, patrons can rent it digitally on most platforms for a price between $3-4.

With a free post-film discussion on December 4 from 12:30 to 1:30 p.m. from Dr. Tianlong Yu, Professor of Education at Southern Illinois University Edwardsville. All are welcome! Register for the event here.

This event is co-organized by the Webster Film Series and the Confucius Institute at Webster University.