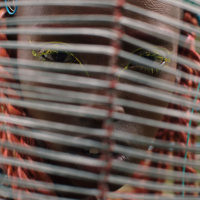 Renaissance man Saul Williams has recorded half a dozen albums and worked with producers like Rick Rubin and Trent Reznor, he has written about as many volumes of poetry, and he starred in the 2014 Broadway show Holler If Ya Hear Me (a jukebox musical of Tupac Shakur music). Perhaps best known to St. Louis audiences as the star of the 1998 film Slam (winner of the Audience Award at that year’s St. Louis International Film Festival, not to mention the Grand Jury Prize at Sundance and the Camera d’Or at Cannes), or for any of his many appearances at Mississippi Nights or Blueberry Hill’s Duck Room over the years, this long and impressive resume now feels like it has all been leading up to the visionary crowdfunded Afrofuturist punk musical Neptune Frost, which he made with his wife, the Rwandan artist Anisia Uzeyman. With Williams co-directing, writing, and composing the music and Uzeyman co-directing and shooting the film, the end result of Neptune Frost is a terrifically good-looking and -sounding picture. In it we find ourselves in Burundi amidst an anti-colonialist hacker collective composed of former coltan miners and an intersex runaway who joins their efforts. Though this film has been kicking around the circuit of the world’s best film festivals for a year now (Cannes, Toronto, New York, Sundance), it still feels so far ahead of its time that we haven’t caught up with it culturally just yet.

In Kinyarwanda, English, Swahili, and French with English subtitles.