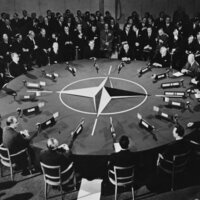 NATO at 70: Enlargement and Challenges to Sustainable Peace

On April 4, 1949, the Foreign Affairs Ministers of the twelve founding members of the North Atlantic Treaty Organization (NATO) met in Washington, DC, to sign the treaty. Following the end of the Cold War in 1991 and 9/11 terrorist attack, NATO underwent a series of changes  which changed its core mission. However, it remains undoubtedly the most successful military and political alliance of the modern era.

NATO's pros and cons will be discussed by our distinguished invited speaker, Dr. Fatmir Besimi, Associate Professor of Economics at the South-East European University, and former Defense Minister and Economy Minister of the Republic of North Macedonia.

Dr. Besimi will talk about the role of NATO for the Western Balkans and its contribution to peace in the region and how it helped Western Balkan countries transformation "from importers to exporters of peace" through NATO peace mission worldwide.

This colloquium is free of charge and open to the public, but we kindly request that you register HERE