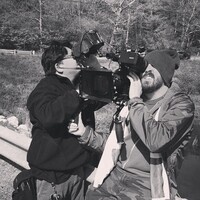 Peter Bolte, a native of the St. Louis area who recently moved back to the city from Brooklyn, is an award-winning filmmaker and photographer. His cinematography credits include the new SLIFF-featured documentary The Booksellers, which premiered at SXSW and screened at the New York Film Festival; the Emmy-nominated HBO documentary Casting By (SLIFF 2018); and the 2015 documentary Thank You for Your Service. Bolte both directed and shot the features All Roads Lead (SLIFF 2013) and Dandelion Man, and he’s currently in pre-production on his third feature, Down Sick River. He’s also directed and shot short films (including Hey! Aren’t YouGarret Crest?, which screens at this year’s SLIFF), music videos, and commercials. Bolte attended the Artist Academy at Lincoln Center as part of the 2013 New York Film Festival. Filmsthat he’s shot have screened at such venues as the Toronto International Film Festival, VancouverInternational Film Festival, and Doc NYC.