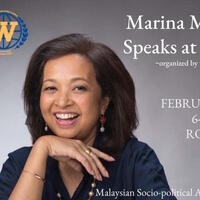 Marina Mahathir is a writer, women’s rights and HIV/AIDS activist. She served as the President of the Malaysian AIDS Council for 12 years from 1993-2005 and was a member of numerous international and regional committees on HIV/AIDS.

From 2010-2016, she served on the Board of Sisters in Islam, which advocates for justice and equality for Muslim women, and remains the chair of the Finance and Fundraising Committee.

Marina has written a fortnightly column in a local English-language daily for more than 20 years, and writes and speaks regularly on current issues particularly where it relates to gender, human rights and religion. She is active on Twitter (@netraKL) and Facebook and has authored three compilations of her newspaper columns, In Liberal Doses (1997), Telling It Straight (2012), and Dancing on Thin Ice (2015).

In 2010, Marina was named the UN Person of the Year by the United Nations in Malaysia. On the 100th anniversary of International Women’s Day in 2011, Marina was one of only two Malaysian women named to WomenDeliver.org’s list of 100 Most Inspiring People Delivering for Girls and Women. In 2016, Marina received France’s highest award, the Chevalier de la Legion D’Honneur in recognition of her work in HIV and women’s rights. This is in addition to receiving the Dato Paduka Mahkota Selangor (DPMS) from the Sultan of Selangor in 1997 which carries the title ‘Datin Paduka’.

Marina’s abiding interest in education especially for young women has led her to be appointed to the board of the Asian University for Women in Bangladesh. In 1997 she received an Honorary degree from Universiti Sains Malaysia for her work in HIV/AIDS education, in 2014 from Wawasan Open University, Penang for her work in human rights and in 2018 she received an Honorary Doctorate from her alma mater, the University of Sussex, UK. Previously she also co-produced an award-winning TV programme for young women, 3R –Respect, Relax, Respond which ran for 10 years on TV3.

Marina’s latest venture is a website for women travellers in Asia and the Middle East, Zafigo.com and ZafigoX, an event on women and travel that features inspiring women who have faced challenges and barriers while travelling and overcome them.