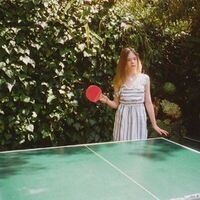 As part of the Film Series virtual Speaker Series, for all of March we'll be focusing on Sofia Coppola. After an ill-fated turn as an actor in her father’s film The Godfather, Part III, Sofia followed in the Coppola patriarch’s footsteps as a director, quickly proving herself to be an auteur in her own right, establishing a poetic tone and gauzy directorial style unique to her. Only the third female to garner an Oscar nomination for Best Director, and now an active filmmaker for over twenty years (starting with her 1998 short "Lick the Star"), she shows no sign of stopping anytime soon. Each film is available on popular streaming servies or VOD. Watch each film ahead of time and then join us every Thursday evening for an in-depth discussion. On Thursday, March 18th, at 7pm, Jessica Pierce, freelance filmmaker and General Clerk for the Webster Film Series, will discuss

(Sofia Coppola, 2010, USA, 94 minutes)
Though one of her lesser-known films, Somewhere very much captures the typical spirit of Coppola’s work. Featuring a young Elle Fanning as the daughter of a somewhat estranged celebrity father, Somewhere focuses on a strained-but-ever-evolving relationship between parent and child. Told through few words, long takes, and some improvisation, Somewhere displays love, laughter, and aimlessness through innumerable moments of vulnerability and affection between father and daughter.