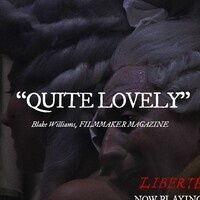 From May 8th to May 14th,  Webster Film Series patrons can rent the new French Albert Serra film Liberté. The succès de scandale of all of 2019's major festivals--Cannes, Toronto, New York--you're likely to be grateful to not be watching Liberté in a room full of strangers. Featuring Visconti muse Helmut Berger (The Damned) as the infamous Duc de Walchen, who is leading a band of libertines in the remote forest of the late 18th century to reject any agreed-upon notion of morality.  You've never seen a costume drama like this one before.  Approach with caution; not recommended for those in households with children and/or the easily offended. This is a $12 rental for a 72-hour period and the Film Series receives half the proceeds.

Rent at this link: https://cinemaguild.vhx.tv/checkout/liberte-presented-by-webster-film-series/purchase