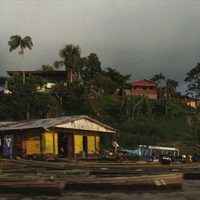 An interesting companion piece to The Fever, Maya Da-Rin's 2009 documentary Lands looks at an urban area triangulated by Peru, Colombia, and Brazil in the Amazon rainforest. Shooting on 35mm, Da-Rin finds a gravity in the images she captures that pulls the viewer into the lifestyles of those who live in Leticia and Tabatinga. An exploration of what the notion of frontiers and borders has on the people who have to live inside and out of them, Lands announced Da-Rin as a filmmaker to watch.