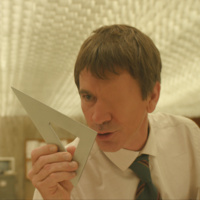 Keep an Eye Out

With an iconoclastic filmography of movies like Rubber, Wrong, and Deerskin, French weirdo Quentin Dupieux has been slowly building a worldwide following in the past decade. His latest to catch a U.S. release, Keep an Eye Out, begins as a man goes to a police station to report having found a body in front of his apartment building, but the reporting of this fact does not go as one might hope. Calling to mind the Bruno Dumont of Li'l Quinquin, or else perhaps a cross between Twin Peaks and Mr. Show, Dupieux's absurdist, deliberately annoying sense of humor keeps feeling more and more right for the moment we're finding ourselves in.