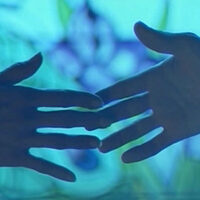 Uniquely suited to a population who has spent much of the past year in quarantine, Frank Beauvais' collage documentary Just Don't Think I'll Scream follows Beauvais as he hunkered down in 2016 after a bad breakup and watched movie after movie after movie in total seclusion. Beauvais narrates, bringing the viewer into the headspace he was in at the time, and the visuals are made up entirely of short clips of the movies he was watching, some recognizable, some not. Think of it as a Frank Film for the Covid era.