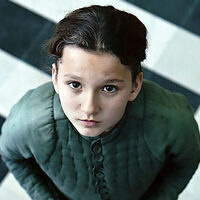 From May 29th to June 11th, Film Series patrons can rent Joan of Arc. Following up his 2017 heavy metal musical Jeannette: The Childhood of Joan of Arc with his same young actress, Lise Leplat Prudhomme, in the title tole, French auteur Bruno Dumont (L'humanité, La vie de Jésus, Li'l Quinquin) turns in a film that is slightly less bold than its predecessor, if only just. Named the second-best film of 2019 by John Waters (not to mention recently being selected as a New York Times "Critic's Pick"), here Dumont shows that after 20+ years of filmmaking, he has no intention of leaving the vanguard.