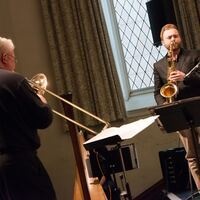 A Jazz Concert In Celebration of Black History Month

by the Webster University Jazz Collective

(music made famous by

Charles Mingus, Horace Silver and others)

The Webster University Jazz Collective, under the direction of James A. Martin, will perform a concert on February 23, 2015 in celebration of Black History Month. The instrumentation for the 15 piece jazz ensemble is non-traditional: violin, alto, tenor and baritone saxophones, two trumpets, tenor and bass trombones, piano, guitar, bass and drums.

$3 general admission. All Webster University faculty & staff and all students of any age are admitted free to departmental performances with valid student ID.