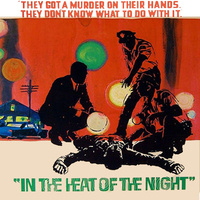 Film Series: In the Heat of the Night

African-American Philadelphia police detective Virgil Tibbs (Sidney Poitier) is arrested on suspicion of murder by Bill Gillespie (Rod Steiger), the racist police chief of tiny Sparta, Mississippi. After Tibbs proves not only his own innocence but that of another man, he joins forces with Gillespie to track down the real killer. Their investigation takes them through every social level of the town, with Tibbs making enemies as well as unlikely friends as he hunts for the truth.
In the Heat of the Night received six nominations in the 1968 Academy Awards winning for Best Picture (Walter Mirisch), Best Actor in a Leading Role (Rod Steiger), and Best Film Editing (Hal Ashby).