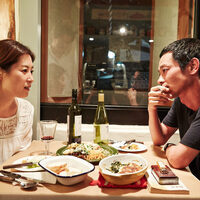 From June 12th to June 25th, Film Series patrons can rent Hill of Freedom, directed by Hong Sang-soo. The second film of our three from master director Hong Sangsoo in the month of June, Hill of Freedom, was released in its native South Korea in 2014 but never seeing U.S. distribution until now. As sweet and charming as Hong followers have come to expect of his films, Hill of Freedom follows a Japanese man, Mori (Ryo Kase, of Abbas Kiarostami's Like Someone in Love), in nonlinear flashback, as the woman he intends to propose to tries to make sense of a pile of undated letters he wrote her. Since Mori speaks no Korean and the film takes place in Seoul, the common language among most of the characters is English, which plays on the film's theme of obstacles in communication and interpretation.