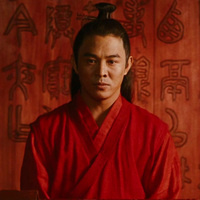 Join us February 15th at 6pm for a free virtual discussion of the film Hero.

On the heels of the blockbuster release of Crouching Tiger, Hidden Dragon a few years prior, and with an American audience newly hungry for more wuxia content, Zhang Yimou’s film Hero gathered a near-unparalleled collective of talent both in front of and behind the camera to make what was then the most expensive film in Chinese history. In a pre-unified China, Jet Li stars as our nameless protagonist, who approaches the King of Qin (Chen Daoming) to be honored for killing his greatest threats: Long Sky (Donnie Yen), Broken Sword (Tony Leung Chiu-wai), and Flying Snow (Maggie Cheung Man-yuk). Co-starring Crouching Tiger’s breakout star Zhang Ziyi, here playing Moon, Broken Sword’s apprentice, and with gorgeous production design and cinematography, courtesy of Huo Tingxiao for the former and Christopher Doyle for the latter (reteaming Doyle, Leung, and Cheung two years after the landmark In the Mood for Love), Hero remains one of the most beloved and successful foreign-language films in the American box office.

Hero is available to watch through the subscription-based streaming service HBO Max (subject to change), or can be rented digitally on most platforms for $3.

Join the free post-film discussion on February 15 from 6:00 to 7:00 p.m. from Dr. Belinda He, postdoctoral fellow of cinema and media studies at UC Berkeley. Patrons should expect to be visible to all speakers and other attendees; we will be meeting as a large group. All are welcome!

Register for this event here.

This event is co-organized by the Webster Film Series and the Confucius Institute at Webster University.