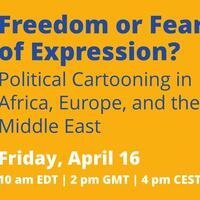 Freedom or Fear of Expression? Political Cartooning Africa, Europe and the Middle East

Is it getting harder to speak up in both democracies and dictatorships? This forum will explore the role of political cartooning in the development of civil and political freedoms in our times. Please join us for a discussion of cartooning and free speech regulation in Europe, the cartooning experience of the Ghanaian satirical artist Bright Ackwerh, and the strategies of the Iranian government that changed the life of the editorial cartoonist and activist-in-exile Kianoush Ramezani.

MODERATOR:
Oleg Minin is Visiting Assistant Professor of Russian at Bard College. He holds a Ph.D. from the University of Southern California. His fields of specialization include the literature, visual, and performing arts of the Russian Silver Age and Russian avant-garde; the satirical press of the Russian fin de siècle; Habermas’s social theory and Bourdieu’s theory of cultural production; and language pedagogy. His work has been published in The Russian Review, Experiment: A Journal of Russian Culture, and Slavic and East European Journal. He is the co-curator of the exhibition Demonocracy: All Hell Breaks Loose in 1905 Russia at the Doheny Memorial Library, USC, and curator of the Ferris Collection of Sovietica at the Institute of Modern Russian Culture. He previously taught at the University of Southern California; California State University, Northridge; Glendale Community College; and University of California, Riverside. At Bard since 2012.

SPEAKERS:
Nives Rumenjak obtained her Ph.D. in History from the University of Zagreb. She is a senior IR Lecturer and Head of the IR Department at Webster University’s Leiden campus. Since 2008, she has been a Center Associate at the University of Pittsburgh’s Center for Russian, East European, and Eurasian Studies. Previously, Dr. Rumenjak held a research position at the Croatian Institute of History in Zagreb for eleven years, where she published her most comprehensive book, The Political and Social Elite of Serbs in Croatia at the End of the 19 Century: The Rise and Decline of the SerbianClub. Dr. Rumenjak’s areas of expertise include Central and Southeast European studies, sociohistorical prosopography of elite groups, nationalism, borderland identities, freedom of expression and political cartooning in the modern era. Her recent article, titled "Freedom of expression in multicultural societies: Political cartooning in Europe in the modern and postmodern eras," is published in 2019 in Empedocles: European Journal for the Philosophy of Communication.

Born in 1989, Bright Ackwerh is an artist from Ghana. He is a product of the Kwame Nkrumah University of Science and Technology where he earned a BFA and MFA in painting and sculpture. His practice is situated in the field of painting, illustration and street art. He was the recipient of the Kuenyehia prize for Ghanaian Contemporary Art for 2016, an honor conferred on him by a jury led by Professor Emeritus El Anatsui. Bright’s work had been gaining critical acclaim on social media because of his strategy to question the limited spaces available for displaying his art and for engaging a young art audience in his hometown of Ghana. Bright Ackwerh’s practice has been heavily influenced by the Ghanaian artist duo FOKN BOIS and the work of Nigerian activist and musician Fela Kuti in how they have made social commentary. Mr. Ackwerh’s work has recently been centered on investigating pop culture as a medium which he also explores through public poster making. His work has been shown in group exhibitions in Ghana and abroad including ‘Cornfields in Accra’ in 2016, ‘Orderly Disorderly’ in 2017 and his first solo ‘Where De Cho Dey’ in 2018. He has also been involved in organizing art workshops in the northern region of Ghana in collaboration with some development agencies based in Tamale. Bright is currently studying at the Kwame Nkrumah University of Science and Technology and continues to make work inspired by global popular culture.

Iranian award-winning editorial cartoonist and activist-in-exile, Kianoush Ramezani lives and works in Europe since 2009. His editorial cartoons appear regularly in French newspapers and media like Courrier International and La Croix, and have also been published in Libération, Arte, We Demain and other international media. A series of Kianoush's original cartoons are part of the collection of Kunstmuseum Solingen in Germany. He received the French award for artistic courage of 2018 in the Angouleme International Comics Festival. He has given educational lectures in high schools, colleges and universities since 2010 in Europe in order to raise awareness about the importance of "the freedom of expression" among the young generation. He chose “Cartooning: The Art of Danger” for his TEDx talk in 2014, months before Charlie Hebdo’s terrorist attack. Kianoush follows international and local societies, educational systems and other art fields like short films, installation and video arts. He has been curating and directing international cartoon exhibitions and awards since 2011 in Europe [France, Sweden, Germany, etc.]. He has been a jury member of Interfilm Berlin [International short film festival] in 2015 and 2016. Kianoush is the co-founder and President of “United Sketches,” an international organization promoting freedom of expression and cartoonists in exile.