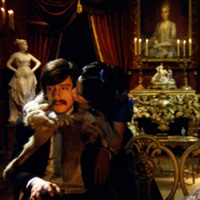 From 11/13 to 11/26, Film Series patrons can rent Francisca. Newly restored in 4K, Portuguese master Manoel de Oliveira's crowning achievement may well be his 1981 film Francisca, which plays like Barry Lyndon had it been directed by Jean-Marie Straub. An exquisitely handsome production, Francisca is something of a Russian nesting doll of storytelling--the film is based on a true incident from the 19th century where a son of an English officer disgraced himself for love (which comes in the form of the titular Francisca, aka "Fanny"), but the movie is an adaption of an adaption of an adaption, and de Oliveira employs Brechtian distancing techniques besides, notably having his actors address most of their lines directly to the camera. Regardless, it's hard not to fall into this world of opulently depressing interiors and romantically sad exteriors, all framing a too-realistic love story.