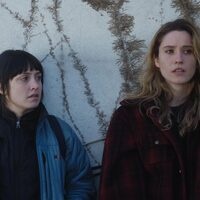 From May 22nd to June 4th, Film Series patrons can rent Fourteen. More immediately accessible than the type of movies we at the Webster Film Series tend to like to run, Dan Sallitt's new American indie Fourteen explores the lifelong friendship between the responsible and grounded Mara (Tallie Medel) and the charismatic trainwreck Jo (Chicago Med's Norma Kuhling). Described by The New Yorker's Richard Brody as "A philosophical, personal cinema that seems created, fresh and whole, from start to finish," Fourteen has much to offer on the subject of competitiveness and support among friends.