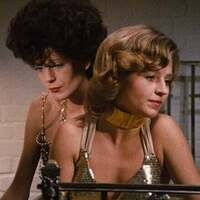 As part of the Film Series virtual Speaker Series, Fassbinder February focuses on the works of Rainer Werner Fassbinder, the prolific LGBTQ+ film director of 1970s West Germany. Once a week, all throughout February, a guest speaker will give a talk on a different film of the trailblazing director. Each film is available on popular streaming services like The Criterion Channel, HBO Max, and/or Amazon Prime. Watch each ahead of time and then join us all month long for interesting and thought-provoking discussions on the many works that focus on politics, gender, sexuality, race, social stigma, and so much more.

On February 11th at 7p.m., Cait Lore, film critic for The Lens, will discuss

Long one of Fassbinder’s best-known and -loved films, The Bitter Tears of Petra von Kant looks at a poisonous queer romance between the titular Petra (Margit Carstensen), a fashion designer, and Karin Thimm (enduring German legend Hanna Schygulla), a potential model. Beautifully shot by Michael Ballhaus, who after shooting over a dozen of Fassbinder’s films was hired by and became a frequent collaborator of Martin Scorsese’s, Petra continues to be a significant cinematic touchstone, referenced by filmmakers such as Olivier Assayas and Peter Strickland, and even the American indie rock band The Magnetic Fields.

The Bitter Tears of Petra von Kant is also available to watch for free to current Webster University students, faculty, and staff through the Webster U. library here.